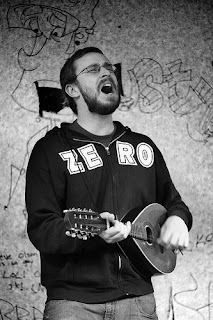 Ventura, CA vagabond, roustabout, scalawag, and etc. Jon Crocker is quite a piece of mythmaking. It's really a daunting task to write a review on one of his albums with an objective stance - rather, his countless and fascinating tours, explorations, and adventures have seemed to be his main claim to fame, with the actual music kind of an afterthought. Or maybe I don't know what I'm talking about. Yeah.

2006 release Edison-Free Sediment Vol. III (how I wish I could effortlessly write a trilogy of albums) is a highly enjoyable collection of rootsy folk tunes about break-ups and famous inventors and map making and German cars and all that fun stuff. I was a bit nervous when I heard this was advertised as being recorded without the aid of guitar, bass, or drums. However, the album is consistently catchy, clever, and enjoyable, something I don't find in too many albums these days, much less obscure underground folk albums such as this.

No track really overstays its welcome and while, admittedly, the sounds are a bit samey throughout (most songs are mandolin-based), there is a real emphasis on melody here. My favorite song "Lucky" sounds like an early Beatles track (yes, I am aware of the reference I just made) set to a jaunty mandolin/banjo combo and Southern gospel-fried backup harmonies. The song is really an indelible experience, and there are quite a few more similarly great tunes - "On Being A Cartographer", "Long Distance Song #3", and "1998", among others.

For all its lo-fi and "tossed off" qualities, this has some top-notch storytelling (On Being An Archaeologist) and clever satire (Cars That Come From Germany), with incredibly memorable melodies throughout. After listening to it, I simply pressed "play" on my CD player and played the whole thing all over again. Nope, no constructive criticism here. "Edison-Free Sediment Vol. III", for what it is and what it claims to be, is flawless. No pretense, just good stuff throughout. And isn't that what's really needed in music these days?

"Oh let's say no thanks to Thomas Edison, if he were dying in my arms I wouldn't give him medicine!"

www.myspace.com/joncrocker
Posted by . at 9:15 PM

he is everywhere at once, he is one with the cosmos...