Jon Crocker - The Dust Will Settle 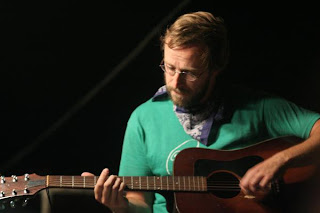 Gosh, I love hooks. Don't you? In fact, where would music be without good hooks? I like hooks with vowel alliteration, like "Two timin' me, nickel and dimin' me". OH! and "What have you been sellin', tall tales are the only kind of truth that you've been tellin'". Hooks, man. Hooks. Those little subtleties. inflections, and instrumental/visual hook-line-and-sinker mechanisms that just send the song through the roof. They separate the Neil Youngs from the Nickelbacks, the Sex Pistols from the Fall Out Boys. Hooks, folks. Look 'em up and tell yr neighbors, because maybe we can cleanse the FM airwaves that way, and maybe even rock 'n' roll in general, and...okay, enough of that.

That nonsense aside, one of my favorite things about Jon Crocker's new(er) album The Dust Will Settle (besides its hooks...) is that it really has the ability to appeal to a wide audience despite its strictly rustic folk sound. Under the acoustic guitars and banjos, it's not hard to spot the Beatlesque melodies, Tom Waitsian storytelling, and Beach Boys-style knack for pretty songcraft. It plays out like a total classic; opener "Skipping Stones" wastes no time
with bridge or reprise or aolo, just a wonderfully satisfying, ultra-catchy verse/chorus format, the musical equivalent of three scoops of ice cream. Coupled with the utterly perfect "Tall Tales", it took a few weeks to even begin to explore the rest of the album. I just played and replayed those two songs.

But can things get even better?! Kinda. As with any album, there are a few tracks floating around that you won't play over and over again; yet it's not that you'll find a necessarily "poor" song here-- Crocker's sound is too familiar-sounding to come across that way. But there's no denying the simplistic beauty of tracks like "All That I Have Left", "Don't Wait Up For Me" and "6 Day Sinner's Son". The whole thing is enhanced with tasteful production, and although my common complaint of barely any variation used in the basic instruments still holds, the album proves itself as totally mesmerizing and strangely hypnotic in its appeal.

Nothing really beats a solid alt-folk album, and Crocker has delivered yet again. He's currently on tour with Adam Faucett and William Blackart, be sure catch his show in a town near you. The greatest and most simple compliment I or any music reviewer could give tends to apply; "The Dust Will Settle" is just really great music.

www.myspace.com/joncrocker
Posted by . at 1:33 AM